Where have all the (young) R&D Scientists Gone? Understanding the R&D Knowledge Gap in Pharmaceutical Companies

How have we ended up here?  Let’s first look at global aging trends. Is there something fundamental happening?

Global Aging Statistics … The aging of the world’s population is inevitably increasing as the percentage of people aged 65+ grows and the proportion of 15 – 64 year olds declines.  This trend is happening in essentially all countries [1].  Currently in Japan, 22.7% of the population is aged 65+ and by 2050, nearly all countries will have populations as old, percentage wise, as Japan’s is today. Global aging is not just about the retiring of baby boomers but is an ongoing trend where the proportion of older people becomes a larger part of the total population because of both a decrease in fertility and increase in longevity.  This trend will continue to increase into the future.

This means that companies in the future will have to find ways to better utilize aging workers to increase their productivity.  Also, finding and keeping new talent will be more difficult as the younger age pool that these workers will be sourced from will become an increasingly smaller percentage of the total population.

Another mega trend [1] is that economic growth as measured by GDP for developed countries will be slow, around 1-2%, although emerging economies will have higher growth rates. Finally, the aging population of 65+ year olds will become a more important part of the consumer market.  In a word, the global economies will have to address the 65+ year old age group with new innovative strategies that address employment, knowledge transfer, social security, health care and age appropriate new products.

Their R&D pipelines dried up and in spite of a dramatic increase in R&D expenditures, new drug approvals did not increase and essentially remained constant even though R&D expenditures more than quadrupled since 1990.  The industry experienced a dramatic loss of R&D productivity as costs to develop drugs skyrocketed [2]. 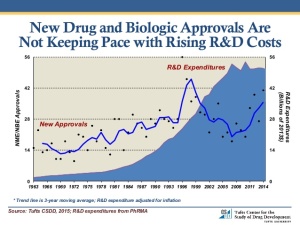 As old drugs lost patent protection, drug companies struggled to replace them with new drugs and these companies cut costs by reducing R&D spending and laying off workers.  This can be seen in the above figure as R&D costs were held steady over the 2007 -2014 time frame.

During this time, pharmaceutical companies laid off workers by offering older workers early retirement incentives so that their jobs could either be eliminated or replaced by younger, “cheaper” workers.  Acquisitions and mergers became more common which resulted in laying off more workers to leverage the efficiencies of scale.  In fact 300,000 jobs were eliminated from the US pharmaceutical industry from 2000 – 2010 [3] and that number has likely continued to increase during the intervening years, 2010 – 2016. The net effect in all of these companies was that experienced and knowledgeable R&D workers were eliminated and only a small percentage have been replaced by younger, less experienced workers.  In other words valuable R&D knowledge is being lost.

Effect on Pharmaceutical R&D … None of these cost-cutting practices has improved pharmaceutical R&D productivity and in fact, R&D productivity appears to be getting worse [2,3], so what is happening?  Well, as discussed in an earlier post [4], constant reorganizations of R&D have a negative effect on R&D morale and productivity…. projects are put on hold, re-prioritized, management structures changed, people leave, new systems and processes are implemented, all with the net effect that R&D productivity declines and takes several years to rebound.  Well known companies with long histories of successful pharmaceutical research have lost their edge due to repeated layoffs and constant reorganizations which wear down the morale of R&D workers.

Many companies have begun to outsource gaps in their R&D organizations but this has met with mixed success [5].  Some companies have decided that to sustain their pipeline they can either invest in R&D or acquire a pipeline and reduce their R&D group [6].  Many companies chose the latter and I believe these companies will regret these decisions.  Sending your best and brightest minds with all your historical R&D knowledge off to work with a competitor does not seem like a smart move.

Some pharmaceutical companies have even tried to outsource their core competency, discovering new drugs.  For example Valeant Pharma’s model was not to develop new drugs itself but acquire new drugs by buying other companies and develop only late-stage, low-risk drug candidates.  This model worked for a while but collapsed dramatically in early 2016 with the company now deep in debt [7].  Valeant is now restructuring.  Other pharmaceutical companies appear to be transforming into late development drug companies.  They leave early drug development to startups and acquire the rights to promising drug candidates from these startups for final Phase III clinicals and FDA submission…..the parts of the drug development process that require the most money. An increasing knowledge gap will also eventually negatively impact these late stage development processes as well.

So the big picture is that layoffs have eliminated many R&D workers and the strategy of outsourcing has transferred this work from pharmaceutical companies to contract research organizations with all their associated problems [5,8] or to startups that are acquired for their pipelines.  These trends all highlight a massive loss of R&D knowledge from traditional pharmaceutical companies.

Now, on top of this situation, if you superimposed the global aging trends and the huge group of baby-boomers in R&D who are now reaching retirement age [9], I think you can begin to see why pharmaceutical R&D might be headed for a period of difficulty.  As R&D knowledge disappears, declining R&D productivity will be exacerbated.

New HR Strategies for Pharmaceutical R&D … As pharmaceutical companies have been laying off R&D workers and generally not replacing them, this has led to an asymmetric age distribution in R&D workers which leads us to the current situation where large blocks of workers are retiring all at once.

HR must be at the forefront of implementing new HR strategies, otherwise talent and skills in R&D will continue to drop in pharmaceutical companies and R&D productivity will decline further.  There will be fewer young R&D workers to hire if millennials are not drawn to majoring in STEM subjects and are not attracted to pharmaceutical R&D as a career.  Also, benefits and incentives are lower in the pharmaceutical industry compared to those offered by technology companies that are attracting millennials.

HR managers might be tempted to consider out-sourcing more R&D work but that has rarely been a good option [7]. Temporary workers and independent contractors do not have the same skin in the game as a permanent employee.  Generally they are an inefficient use of resources for many jobs and they will quickly leave if another company offers them a permanent job.  Outsourcing in all its forms compounds losses of valuable R&D knowledge.

Summary … Pharmaceutical companies are at a crossroads.  Their R&D productivity is declining rapidly and their long-term prognosis is poor as valuable R&D knowledge continues to disappear.  HR managers in these companies need to change their strategies now to help stem the outflow of R&D knowledge.  New career paths are needed for older workers.  Simply laying off older R&D workers with early retirement packages will not help to stem the outflow of R&D knowledge, in fact it makes it worse.  Keeping them on in part-time mentoring positions will facilitate knowledge transfer.

HR practices with respect to R&D workers are obsolete.  The whole trend to increased R&D outsourcing needs to be reviewed within the context of knowledge outflow.  For example, the most successful technology companies such as Apple, Tesla, SpaceX and Amazon are vertically integrated.  They are doing this for a reason(s)….to design better, well-integrated products with complete control over their quality.  Pharmaceutical companies need to start thinking like this otherwise they will struggle as products become less innovative and quality suffers.

Finally the fight for young talent will be intense in the future.  In a recent survey conducted by PwC [10], 51% of life science executives say that hiring has become more difficult than before with only 28% saying they are very confident of having access to top talent. Pharmaceutical HR will need to up their game to attract the brightest and smartest.