The Anatomy of an Inspirational Innovator: Antoni Gaudi

Do you ever feel that the word “innovation” has become such an over-used buzzword in today’s corporate culture, that we’ve lost sight of what it really means and how to nurture it? What are the characteristics of that rare super group of true inspirational innovators that we all “know when we see them” and is it possible that they share a fundamental set of characteristics in common? This question prompted me to look at people I think are inspirational innovators to see if they exhibit a common personality profile or have certain innovation characteristics in common.  Today, entrepreneurs like Steve Jobs or Elon Musk are the typical examples of inspirational innovators.  Similarly, historically important innovators like Thomas Edison or Leonardo de Vinci have also received praise as the innovators of their time. In this post I have chosen another innovator that made a very deep personal impression on me, one often forgotten by the modern innovation authors … Antoni Gaudi.

Brief History of Antoni Gaudi … Antoni Gaudi was a highly individualistic Catalan architect who lived from 1852 – 1926 and whose best known works are found in Barcelona.  After his death, (hit by a tram and unrecognized as a beggar) Gaudi’s works were not very popular with international critics who regarded them as excessively imaginative.  In the 1950s and later, his work became more recognized and was championed by Salvador Dali and others.  Increasing recognition culminated with seven of his major works being listed as UNESCO World Heritage Sites during 1984 – 2005. Perhaps his most famous work is the Sagrada Familia church.

st Impressions … When I saw Gaudi’s major works, I was struck by their creativity and vision. For structures designed approximately a century ago, they seemed fresh, organic, ahead of their time, and totally unlike anything else from that period or even now for that matter.

His most famous, but still unfinished work is the Sagrada Familia church [1], which is due to be

completed in 2026.  When completed it will be the tallest church in the world.  When you experience his work you cannot help but be moved by it.  I have attached various images of the Sagrada Familia to give you an idea of this amazing structure both from the inside and outside.  The image below shows what the church will look like when it is finished.

Gaudi’s Innovations … Gaudi exemplifies the inspirational innovator who thinks completely “outside the box”.

1) Gaudi used nature-inspired themes to design his architecture.  We call this science Biomimicry now, but Gaudi was using Biomimicry before others had even coined the term.  Biomimicry [2] is defined as “a new science that studies nature’s models and then uses these designs and processes to solve human problems”.  Biomimicry has resulted in many new products, but one famous example is a swimsuit modeled on the texture of shark skin.  These swimsuits reduce drag and eventually were banned from the Olympics. [3] 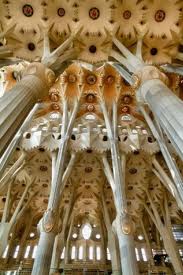 2) Gaudi was the first to use hyperbolic paraboloid vaults in the history of architecture.  This design was innovative not only because it was aesthetically pleasing but because it was incredibly strong and enabled Gaudi to eliminate flying buttresses and incorporate unusual design elements into his buildings. Wikipedia describes the Sagrada Familia as a building Gaudi conceived “as if it were the structure of a forest, with a set of tree-like columns divided into various branches to support a structure of intertwined hyperboloid vaults. He inclined the columns so they could better resist the perpendicular pressures on their section. He also gave them a double turn helicoid shape (right turn and left turn), as in the branches and trunks of trees. This created a structure that is now known as fractal.”

3) Gaudi used inverted scale models of his proposed structures using weights supported by strings which produced the correct catenary curves and surfaces required to minimize stresses in the design and allowed him to eliminate supporting beams or buttresses which had been necessary until then.  This was Gaudi’s equivalent of computer modeling; without this modeling technique he could not have built his now famous structures.

4) He integrated the use of iron and reinforced concrete into construction which allowed for great strength in his structures.

6) He invented a new technique for making stained glass using three glass planes of the three primary colors varying the thickness of the glass to influence the intensity of the light that diffused through.

Gaudi’s Innovation Characteristics … In my research of Gaudi’s innovation characteristics and personality, I am struck by his uncommon ability to draw on and combine elements from his spiritual awareness, artistic sensibilities, observations of nature, and technological expertise and relentlessly lead others to build structures so large in scope and complexity that most would say it couldn’t be done. Six elements of his innovation personality stand out:

2) Gaudi was inspired by the beauty and aesthetics of nature

3) Gaudi invented unique methodologies in engineering and the building sciences

4) Gaudi had deep content expertise across multiple disciplines, especially in engineering and mathematics

6) Gaudi had a relentless intrinsically driven obsession for his work.

Gaudi exhibited a very keen sense of observation.  Gaudi was a diligent observer of nature and translated this information into his use of ruled geometric forms, the hyperbolic paraboloid, hyperboloid and the helicoids forms found in nature in his architecture. He noticed and studied the organic and fractal patterns found in nature and replicated them into his architectural designs and he was one of the first to use Biomimicry in his design.  Some of these shapes have been rediscovered and used in modern structures; for example, the cooling towers in nuclear power plants.

Nature was Gaudi’s inspiration and he believed nature to be both functional and aesthetic.  Gaudi was profoundly religious and there was a connection his love of nature and his religious beliefs.  Gaudi has been quoted [4] as saying, “Those who look for the laws of Nature as a support for their new works collaborate with the creator”.

Gaudi developed a unique methodology.  For example, Gaudi used inverted, scale models with weights supported by strings to identify optimal structures for load bearing.  This was truly innovative and allowed him to design complex structures that most people were not capable of conceptualizing until the age of computer modeling.

Gaudi had a deep content knowledge in engineering techniques and many building techniques including reinforced concrete and the decorative arts.  Gaudi also had a deep understanding of materials and techniques such as sculpture, wrought ironwork, stained glass, ceramics, plaster modeling and the use of iron and reinforced concrete.  Without this deep technical knowledge, Gaudi would have been unable to have his structures built to his vision.  All his content expertise was embedded in his innovations.

Gaudi insisted on executional excellence.  He paid attention to detail in his design.  As a result, his physical structures were breath-taking.  They literally change the way we think about architecture.  Gaudi, unlike Leonardo de Vinci, was able to translate his vision into physical structures by executing his ideas so that we can still enjoy them today.  His innovations were not limited to having a creative idea but were about translating and experiencing them in the real world.  When the Sagrada Familia is completed it will be one of the largest, tallest and probably the most complex stone church ever constructed.

Finally, there is the deep seated motivation for Gaudi’s innovations.  Gaudi had a passion, indeed an intrinsically driven obsession for his work that was independent of extrinsic rewards like money or recognition. He died poor, dressing in rags, yet he had a relentless attention to detail and perfection to the end, often sleeping at “his” Sagrada Familia church.  Gaudi’s obsession to build the Sagrada Familia was inspired by his intrinsic love of nature and driven by his religious and aesthetic beliefs. Wealth and other external factors did not motivate him [5,6].

Summary … Gaudi exemplifies the inspirational innovator. He was a careful observer of nature where he found a source of great inspiration; he used an innovative methodology, had deep content expertise, was able to execute his vision, and had an unyielding obsession to complete his work.  Like other inspirational innovators he did not want to design a derivative structure (product) based on others’ ideas.  He wanted to design something completely new.

While the Gaudis of the world are rare and their innovation traits are at the extreme edge of the innovation spectrum, they can teach us much about how to nurture, motivate and reward innovators who are currently struggling in corporate cultures which are unfriendly to innovation.

6.     Setting the Right Learning and Performance Goals for Innovation https://innovationcrescendo.com/2013/10/27/setting-the-right-learning-and-performance-goals-for-innovation/