Let’s stop kidding ourselves about what innovation really is. We’re commonly overusing and misapplying the word in the workplace today. Let’s not call a new flavor of yoghurt or a new mouth rinse bottle, innovation. More accurately, they are simple line extensions. Historically many of the great technological, scientific and artistic leaps forward were by a rare super group of true inspirational innovators that “jump started” and moved civilization forward in a quantum leap. What are the characteristics of that rare super group of true inspirational innovators and is it possible to identify innovation characteristics of great innovators?

This post is part of a series examining great inspirational innovators and identifying true innovator characteristics and behaviors. The goal is to develop a model that will help companies/managers/venture capitalists identify, hire, manage, motivate, reward and retain real innovators who might develop a new disruptive product. See for example my previous posts on Antoni Gaudi [1] and Harry Brearley [2] which identify common personality attributes and innovation characteristics, as well as posts on motivation and reward models [3,4,5,6] for “inventor/innovator employees”, and posts that will help you differentiate innovators as either adaptive or creative [7,8].

History of Nikola Tesla …Nikola Tesla was born on July 10, 1856, in Smiljan, Croatia. Tesla’s interest in electrical invention was influenced by his mother, Djuka Mandic, who invented small household appliances in her spare time while her son was growing up. Tesla’s father, Milutin Tesla, was a priest and a writer, and he wanted his son to join the priesthood.

In 1884, Tesla arrived in the United States penniless, only with a letter of introduction to Thomas Edison, whose electrical inventions were hot items at the time. Edison hired Tesla to make improvements to Edison’s inventions. However, several months later, the two parted ways due to a conflict over payment for Tesla’s work.

After leaving Edison in 1885, Tesla received funding for the Tesla Electric Light Company and worked to develop improved arc lighting. After successfully doing so, however, Tesla was forced out of the company and for financial reasons had to work as a manual laborer. In 1887, he secured funding for his AC electrical system and filed several patents for AC-based inventions.

Tesla’s AC system caught the attention of George Westinghouse, who was seeking a solution to supplying the nation with long-distance power. Convinced that Tesla’s inventions would help him achieve this, in 1888 he purchased his patents for $60,000 in cash and stock in the Westinghouse Corporation. Tesla and Westinghouse were in direct competition with Thomas Edison, who was intent on selling his direct-current (DC) system to the nation. A negative-press campaign was waged by Edison, in an unsuccessful attempt to undermine interest in AC power. Tesla patented several more inventions during this period, including the “Tesla coil,” which is still used in radio technology today.

Fortunately for Nikola Tesla, the Westinghouse Corporation was chosen to supply the lighting at the 1893 World’s Columbian Exposition in Chicago, and Tesla conducted demonstrations of his AC system there. Two years later, in 1895, Tesla designed one of the first AC hydroelectric power plants in the world at Niagara Falls. The output from this plant was used to power the city of Buffalo, New York. With this success, the AC system would quickly become the preeminent power system of the 20th century, and it has remained the worldwide standard ever since.

Tesla’s Inventions …In addition to his AC power system and coil, Tesla also discovered, designed and developed ideas for a number of other important inventions, including, dynamos (electrical generators similar to batteries) and the induction motor (photo below), many of which were officially patented by other inventors. He was also a pioneer in the development of neon and fluorescent lights, radar, X-rays, radio and remote control by radio. Similarly he was also very interested in the wireless transmission of power, may have received radio signals from space (i.e. radio astronomy), developed a steam powered mechanical oscillator and claimed to have developed a directed-energy weapon.

All in all, Tesla is known to have been granted at least 278 patents. As an example of his creativity, his last US patent U.S. Patent 1,655,114 was for a tiltrotor/tiltwing biplane that would take off vertically and then gradually achieve horizontal flight like a normal plane. It was powered by a turbine engine. Both these ideas were a first that have now been executed in the form of the V-22 Osprey aircraft of the US military.

How did Tesla Invent? …Tesla had a photographic memory and had visions which might provide a solution to a problem he was working on. Tesla was able to envision an invention in his mind in precise detail. He typically did not make drawings of his inventions but worked from memory. This makes it difficult to know if some of his outrageous claims, especially later in life, were real and based on something definitive in his mind or not.

Surprisingly his inventions were not based on a deep and sophisticated understanding of modern physics. He did not believe in subatomic particles or even the electron as a carrier of charge but believed in the notion of an “ether” that transmitted electrical energy. He did not believe in the inter-conversion of mass and energy as proposed by Einstein or in the notion of curved space-time.

His skill set was more based in experiment, coupled with an intuitive understanding of electromagnetism and where these technologies might be headed well before other people at the time. Tesla was well ahead of his time in predicting the wireless transmission of information and power, and predicted or partially developed many related technologies; for example, remote control, neon and fluorescent lights, wifi, radio and radar. In some cases he was able to build working prototypes including a radio-controlled boat in 1898, a patent for radio in 1900 before Marconi, and he postulated wifi and radar might work. Given that many important inventions he prototyped became commercially successful and important, it is easy to see that Tesla was one of the most important innovators of the early 20th century period. 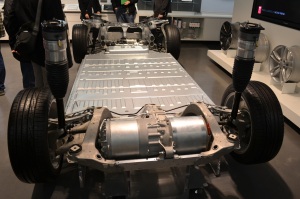 Here is a photo of induction motors that are of Nikola Tesla’s original design used in a modern Tesla motor car developed by Elon Musk’s company…..

The comparison to Thomas Edison is interesting. Their personalities and motivation were very different. While Edison was a powerful figure who focused on marketing and financial success, Tesla was an idealist who was not commercially savvy and somewhat vulnerable to commercial exploitation. In terms of innovation temperament that I explored in earlier posts [7,8,9], Edison was definitely an adaptive innovator as opposed to a creative innovator. Adaptive innovators tinker with ideas, produce lots of prototypes and make incremental improvements to products. On the other hand, creative innovators like Leonardo da Vinci are gifted in thinking about new ideas but are typically not good in translating ideas into reality. Even though Tesla was an experimentalist he was more of a creative innovator than an adaptive innovator. He let many great ideas slip through his fingers for others to patent and commercialize and was more interested in the “big” picture, often letting others execute development and commercialization of his ideas. In fact Tesla is considered the archetypal “mad scientist”, but in hindsight it is incredible how he was at the center of the initiation of a large number of the most important innovations of the 20th century – proof that these two characteristics are not mutually exclusive.

Notable Tesla Quotes …The following quotes have been attributed [10,11] to Tesla and demonstrate the love and commitment Tesla had for invention to the point that money only had value to Tesla as a way to fund future experimentation. These quotes reveal a great deal about Tesla’s thoughts, motivation and inspiration and by extension, may be helpful to companies wishing to identify innovators in their midst as well as provide important clues for (performance) management of these unusual workers.

Comparison of Tesla’s and Gaudi’s Innovation Characteristics …Tesla reminds me of another incredible and inspiring innovator, Antoni Gaudi [1]. Both were productive in the late 19th and early 20th centuries. Both had similar innovation characteristics and personalities. Both had a strong feeling that they had to work for the service of mankind (quotes 4,5). Both were deeply religious and drew inspiration from religious sources and from nature (quote 6). Both never married and felt that marriage would hinder their professional projects. Both were not motivated by external motivational factors like money (quotes 1,2,3). Both were uninterested in fame or social status, although Tesla liked to dress well, and had meticulous eating and sleeping habits. Both were vegetarians.

Both had an uncommon ability to draw on and combine elements from their spiritual awareness, artistic/scientific sensibilities, observations of nature, and technological expertise and relentlessly led others to build structures so large in scope (or design experiments/technologies so large in scope) and complexity that most would say it couldn’t be done.

Five elements of their innovation personality stand out:

Comparison of Tesla’s and Harry Brearley’s Innovation Characteristics… Tesla makes an interesting comparison with Harry Brearley[2]. Brearley was a practical person who like Tesla rose up from humble beginnings to become a great entrepreneur and successful. In this case: 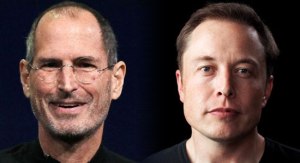 Musk and Steve Jobs have many attributes in common but differ in many ways as well. Business was conducted differently one hundred years ago.

Conclusion …Nikola Tesla had many characteristics in common with both historical and modern-day inspirational innovators. Perhaps the most important characteristics are his complete obsession with invention, altruism, incredible risk-taking, clear future vision, and being in the right place at the right time.

One characteristic that sets Nikola apart from his modern counterparts is his lack of business savvy relative to modern day successful entrepreneurial innovators. Innovators that make quantum differences in today’s society are almost all accomplished businessmen as well as innovators. True, Apple started with Steve Wozniak as the engineering guru who designed the Apple I & II, but without Jobs, Apple would likely have failed. Tesla was more of an altruistic inventor rather than an entrepreneurial innovator. I suspect that if Tesla was around today, he would not have been able to secure funding for his inventions since today those in venture capital and the world of finance rarely understand the inventor’s mind or motivation and most likely Tesla would not have been as prolific. He was too much of an odd-ball. Tesla was an amazing inventor but not an entrepreneur.

Someone like Tesla needs an entrepreneurial or corporate partner to fill those support roles. Although inspirational innovators like Tesla are uncommon there are still plenty of original, innovative minds “hidden in full sight” in our companies, often dismissed as unmanageable, crazy scientists who aren’t team players. That is a sad thought, especially for someone interested in innovation like me because these colleagues are probably vastly under-utilized and mismanaged in their company’s R&D departments. Developing an integrated innovator behavior model would help identify common personality attributes and innovation characteristics, provide motivation and reward metrics for “inventor/innovator employees” [3,4,5,6], and will classify the different types of innovators, for example as either adaptive or creative [7,8], making it easier to develop corporate roles and responsibilities.

Hopefully as line extensions run out and your company is driven to pursue more innovative solutions, a deeper understanding of innovator behaviors and motivations will help identify, hire, manage, motivate, reward and retain real innovators and your company will be driven to innovation crescendo.